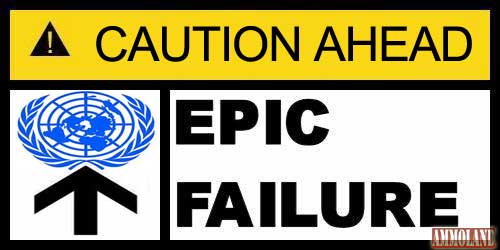 Geneva Switzerland – -(AmmoLand.com)- The Seventh Conference of the UN’s Arms Trade Treaty (ATT) met August 30, 2021, through September 3, in Geneva. And as expected, the treaty dragged forward for another year, but only because time and the calendar told us that it did.

The reality is that the ATT only lurched farther towards failure, as there was no progress to global peace via weapons control.

Last year a Diversion Information Exchange Forum (DIEF) was discussed in order to deal with diversions of weapons into the Black Market and the criminal transfers from it.

The DIEF is touted as a sui generis, that is, something unique. It is a new subsidiary body, and it is expected to do the impossible – gain control of arms diversion into the global Black Market!?

And why is it considered unique?  It’s unique because it has never been tried before.

It has never been tried before because the idea behind the DIEF is so silly.

Nations will be tasked with reporting ALL the details of diverted weapons in order to deal with the Black Market. It is hoped that states “will mainstream sharing relevant information through the DIEF about every case of diversion that was prevented and addressed.”

But nary a Nation wants/will talk about those pesky secrets.

The arms Black Market is all about secrets. As Allison Pytlak, a Civil Society activist, complained in 2017, “It is no secret that the international arms trade is full of secrets. Stories of corrupt brokers, forged documents, erratic supply chains, hidden cargo, and cash pay-offs are not just the stuff that films are made of…” And then she explains the theory behind the ATT;

“Bringing the arms trade “out of the shadows’ was one of the motivating factors behind the ATT, in the hope that improved control of legal markets would prevent diversion to illicit ones.”

But corruption at the highest levels of government is extremely common. Imagine the embarrassment of Presidents, Chairmen, Kings, and would-be Kings when favored sons, daughters, and nephews are caught to be participating in Black Market activities! Or if they themselves are caught taking payoffs.

So because of the potential sensitivity and confidentiality of these reports and meetings. and not to mince words, any meetings would be in-person and very secret. Luckily, the 2021 DIEF meeting was postponed because of Covid-19, but countries are asked to divulge and discuss diversions and the national responses to those diversions.

For security reasons, the DIEF has limited the reporting of all that sensitive information to treaty states only, and some of them may even be enemies of each other. But “Participants can share all the information that they obtained within their competent national authorities while maintaining confidentiality.”

‘While maintaining confidentiality!’ Really? How so? So is the information secret or is it not secret? Why would any country take a chance of having their enemies know what they have, and what they are doing? How can this silly scheme be effective in combatting diversion to the Black Market?

Rival countries would be participating, listening, learning, and strategizing. This is a very strange combination of transparency and secrecy, and it is going to make participating nations very nervous and insecure. The DIEF forum invites serious problems of suspicion and mistrust into the ATT process and is not going to work as promised.

We predict the DIEF forum will fail because it requires the sharing of the most sensitive kind of information. The new ATT DIEF scheme requires more information, and more transparency than participating nations are willing to give.

“Transparency” is a word that means that everyone interested will find out. But transparency is potentially harmful to Nations, especially when that transparency relates to state security or illegal activity supported by national elites.

“Diversion” is the nice name socialists give to the Black Market when they don’t want it easily understood. And understand, that they don’t have a clue about Black Market Control, oops, we mean Diversion Control. When Nation States sign on to the ATT, they obligate themselves to take measures to prevent diversion into the Black Market, but they all do it.

Even the great global law known as the Arms Trade Treaty can, and is, subverted by the Black Market, as is just about every other restrictive law written by governments.

Simon Yazgi, a senior UN advisor, acknowledged, “That these groups arm themselves on the illegal markets also means that they bypass the State-based instruments which regulate government-authorized arms transfers.”

Nevertheless, the ATT’s proponents know it is failing and they are extremely desperate to try anything, and the postponed DIEF is it for now. We will not know if DIEF working as expected at least until the Ninth Conference in 2023.

“Reporting” means that nations tell-all and a nice term that proponents like to use is “reporting fatigue,” which merely permits them to forget about the difficult truth that nations do not benefit by telling about their sensitive interests. What “Reporting Fatigue” really means is that nations are saying “NO” very diplomatically Reporting fatigue actually existed well before the DEIF idea.

Further proof of the reporting fatigue is that in April 2021, about a quarter of the reporting countries had not yet submitted their reports, and over a third were not up to date with their annual reports. Instead, participants blamed the lack of transparency on Covid-19 because they were unable to gather the information required to fill out the forms. They neglect the fact that transparency compliance was a problem prior to covid

What a mess for the arms control crowd! Wishful thinking does not work. The disarmament proponents are on the wrong path. There is no end in sight to their folly because they hold so tightly to a plan designed to fail.

The major problem with the ATT is that eliminating arms sales does not benefit participating nations. As an example, about half the nations of Earth do not manufacture arms and if they could not import foreign-made arms, the balance of international power could quickly, and easily, become an unbalanced nightmare.

National borders often change, and that change is usually not beneficial to weaker, smaller nations, or their deposed leaders. So the crucial needs of nations cannot really be met by a treaty whose proponents fully intend to eliminate trade in weapons that nations need to obtain and possibly use in order to maintain their sovereignty.

Though these nations have been shamed into accepting the wondrous dream of peace through disarmament, they cannot possibly take the steps required to make the goals of the treaty into a reality. The only major interest they share with ATT proponents is civilian disarmament.

The truth is the real benefits to participating nations are more of a financial and political nature rather than a true desire for a fully legal, global arms trade treaty, whatever the current definition of a ‘legal’ arms transfers may be.

Then, as the Seventh Conference concluded, record amounts of US military-grade arms were transferred (READ GIFTED) to the Taliban militants.

Filled with frustration and failure, Allison Pytlak spilled the beans in another editorial. She stated in Civil Society’s ATT Monitor, “The end result of arms transfers can never be a happy story, because weapons and related equipment are developed with the express purpose of causing death or harm, and so even “responsible” trading in them will inevitably lead to the same result. This is why WILPF (Definition added but not part of the quote: Women’s International League for Peace and Freedom) has always advocated for an end to the arms trade, not just doing it better or more safely.”

Why would she explain to participating nations that the result of their participation is eventual disarmament? Nations cannot afford to gamble on survival and cannot follow directions to that path, and so they have not and will not.

Pytlak’s dream of peace and human development is a wonderful dream, but the path of coercing global disarmament does not lead anyone there.

Just maybe, a wiser path to keep a balance of power among nations would be to include armed civilians. Humankind would slowly grow towards an understanding that we fare much better when we are armed and at peace.

We must now wait to see what excuses and complaints will be made about the failure of the DIEF idea, but as nations cannot live with such transparency, its doom is certain.

And that’s “What the Hell Just Happened!”

Alan J Chwick has been involved with firearms much of his life and is the Retired Managing Coach of the Freeport NY Junior Marksmanship Club. He has escaped New York State to South Carolina and is an SC FFL (Everything22andMore.com). AJChwick@iNCNF.org | TWITTER: @iNCNF

Joanne D Eisen, DDS (Ret.) practiced dentistry on Long Island, NY. She has collaborated and written on firearm politics for the past 40+ years. She, too, escaped New York State, but to Virginia. JoanneDEisen@cs.com