Ouch – that’s pretty harsh.  It’s also 100% true, and if anyone has trouble believing it, they haven’t spent  much time at the receiving end of the Left’s dishonesty.  GOC has been – for over 40 years.

We’ve seen a lot of this in the past week – just days ago, Governor Gavin Newsom signed a slew of asinine bills, many of which came about from a flawed premise.  One such example is SB 264 by Senator Dave Min, an Orange Country Democrat who thinks that prohibiting guns shows is going to magically stem the tide of criminals with guns.  Originally written to prohibit the sale of firearms, ammunition, and ghost gun parts on all state-owned propert 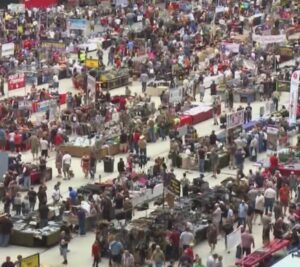 y, it was limited to Orange County by the time it made it to Newsom’s desk.

As he pushed the bill through the legislative process, Min proclaimed “The evidence is clear – more guns in our communities means more gun violence.”

Now here’s an even bigger whopper:

“Gun shows are responsible for the proliferation of countless guns into our neighborhoods — including unlicensed firearms and so-called ghost guns.”

The evidence is NOT clear.  Gun shows are not responsible for the “proliferation” of countless guns in our neighborhoods.

What boggles the mind is that the so-called “progressives” – with their illuminated and erudite perceptions of humanity, actually buy into the notion that criminals sit and thoughtfully consider the laws they are going to break before they break them.

We know differently, though.  According to a January 2019 U.S. Department of Justice survey of prison inmates, less than one percent (0.8) of criminals that possessed a firearm during their current offense acquired their guns from gun shows. By contrast, nearly 50 percent reported acquiring their guns illegally, such as by theft or on the black (otherwise known as an “illegal”) market.

Yet another uncomfortable tidbit the Left prefers to ignore.

Min even hints that the state is somehow complicit when it comes to “gun violence” proclaiming that “California needs to get out of the business of selling guns.”

Selling guns?  He can’t be serious – but of course, he is.  Progressive thinking obviously doesn’t go from point A to B – it takes some mighty odd mental gymnastics to come to the conclusion that a perfectly legal activity – the private retail sale of firearms – is somehow akin to state-sponsored gun sales.

And when it comes to gun shows, Min can hardly claim ignorance – GOC sent him multiple letters in which we provided some rather “inconvenient facts” that every gun show must comply with every statute: background checks, waiting periods and registration requirements.  We testified there are zero exceptions; no one can walk into a gun show empty handed and walk out with a firearm. Any statement to this effect is 100% incorrect and designed to manipulate public sentiment about a perfectly legal activity.  To reiterate – a perfectly legal activity in which California – according to Min – is somehow complicit.

GOC also called attention to the fact that there have been virtually no instances of violence at gun shows in California; more incontrovertible evidence that gun shows themselves and the law abiding attendees are not the problem.

In spite of the glut of misrepresentations made about gun shows, Min’s been honest about one thing – he made it perfectly clear that he was disappointed his bill was pared down so much. “…I am very concerned that this bill was limited to Orange County. The tens of thousands of firearms sold at gun shows in neighboring fairgrounds such as Long Beach, Ontario, and San Bernardino will inevitably find their way around the state. We are facing a gun violence crisis in this country, and it is not limited to Orange County or San Diego or San Francisco.

The Senator plans to try again, and will reintroduce a far more expanded version of SB 264 when the Legislature returns in January. We’ll be ready for him – although we have little hope that facts will make one lick of difference.  It’s clear to us that the rights of the law abiding are of no consequence in your world.

****For more facts about gun shows in California, click HERE to read what one of the premier gun shows in the country – CROSSROADS OF THE WEST – has to say about things!****